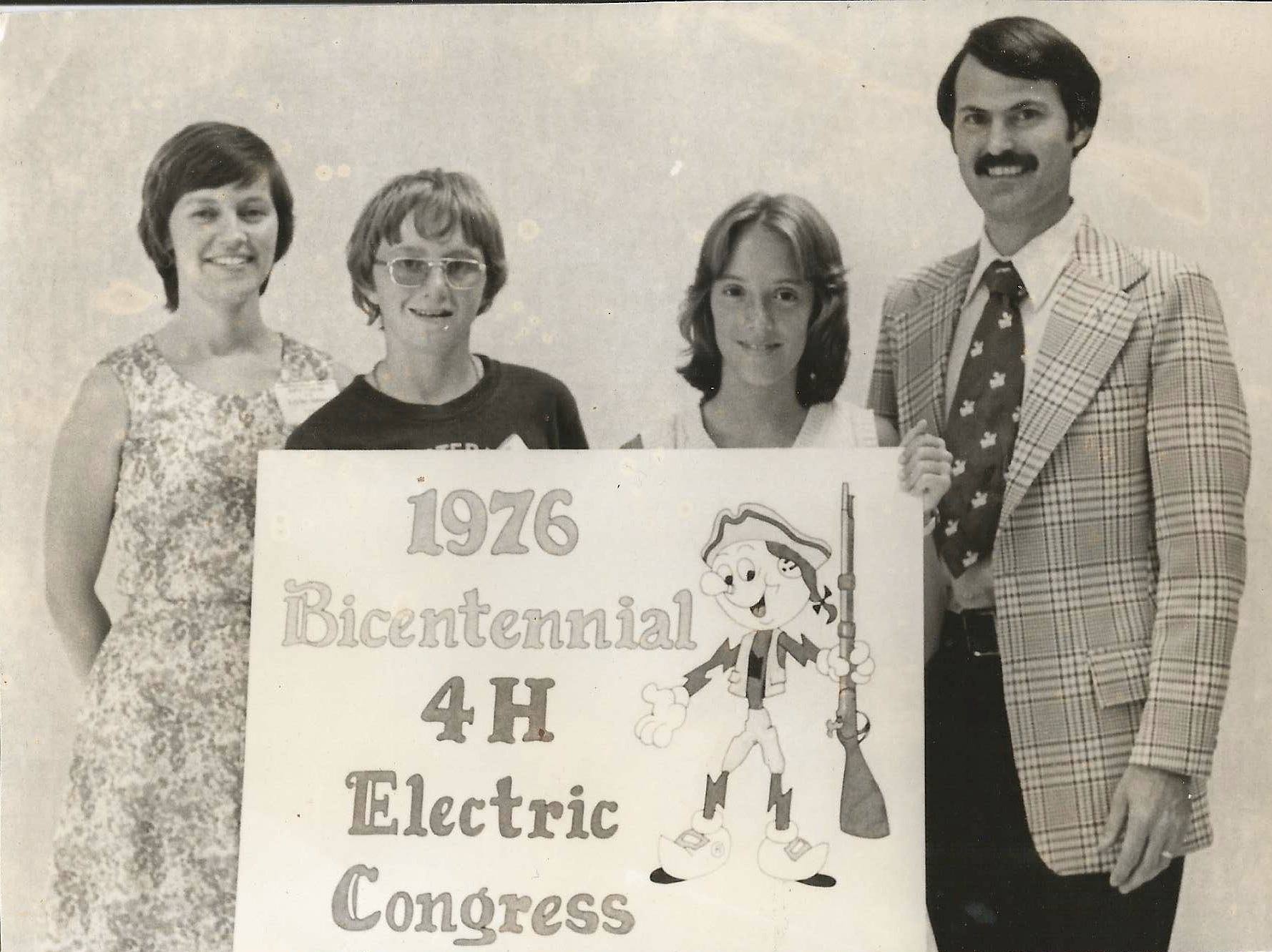 Our family’s 4-H roots go back three generations! My mother, Judy Smith Bray, was singing her way to Stokes County 4-H Talent Show awards in the 1950s. In the early ‘70s, she got me—Leslie Bray Brewer—involved as a member of the Forest Chapel 4-H Club. I gave my first demonstration (now called a presentation) my first year in the club and went on doing demonstrations and project record books annually. Like my mother, I won 4-H talent show awards, but also went on to do things she wasn’t able to, like attend State Congress and Electric Congress.

When my oldest daughter Meghann was seven, we were invited to join a new Stokes County 4-H club of primarily homeschoolers—the School Skippers. Meghann remained an active 4-Her until age 18. Although she won many ribbons and medals in presentations and project record books—even gold at State—her favorite annual event was the 4-H talent show. She never won less than a blue ribbon at the county level and was chosen to compete at District Activity Day seven times and even at the State Congress Talent Showcase four times. Meghann says her 4-H experiences, especially the great training in public speaking, helped her
excel at Salem College and as a reporter at the Mt. Airy News and the Winston-Salem Journal, the editor of The Stokes News, and currently the Marketing and Communications Coordinator for Pet Sitters International. 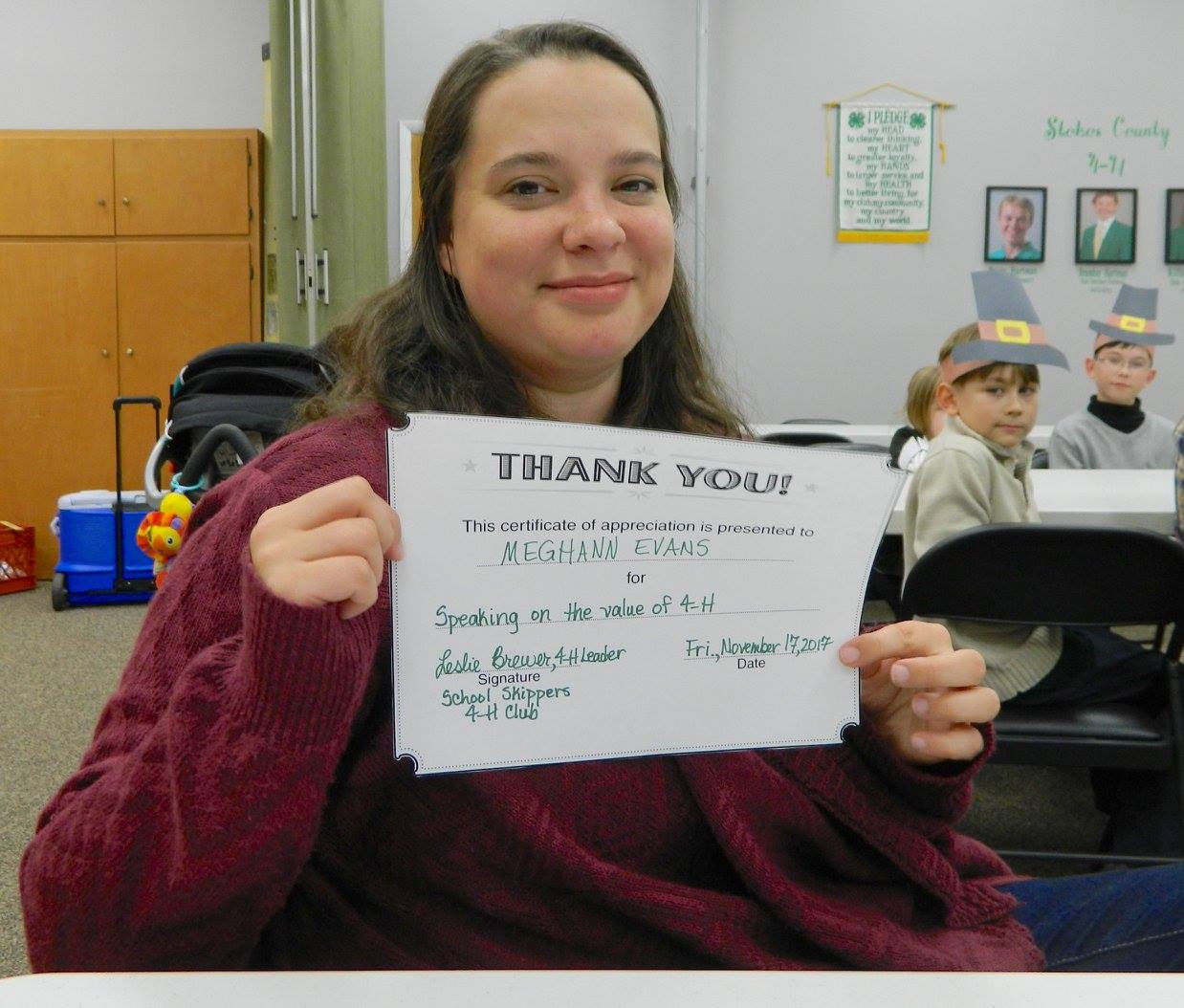 Her younger sister, Chelsea, became a 4-H’er at age five and was very active in 4-H until she aged out. Despite battling shyness, she gave her first 4-H presentation at age nine and took it all the way to State gold! She continued honing her public speaking skills, winning several more State gold medals in a variety of presentation categories. Her award-winning Irish dance presentation was videoed as a model for other 4-H’ers. Chelsea also won many blue ribbons and gold medals for project record books and portfolios. Like her sister, she excelled in the 4-H Entertains portion of 4-H—often performing with Meghann all the way to State Congress showcases. One of Chelsea’s most memorable experiences was being chosen to go to Puerto Rico on a 4-H Plants and Soils trip in 2007. She served as the North Central District Reporter and was inducted into the NC 4-H Honor Club. Her 4-H training prepared her to serve in student government at Forsyth Technical Community College. Those same skills now aid her as a Client Receivables Specialist at Inmar Intelligence and praise leader at her church. 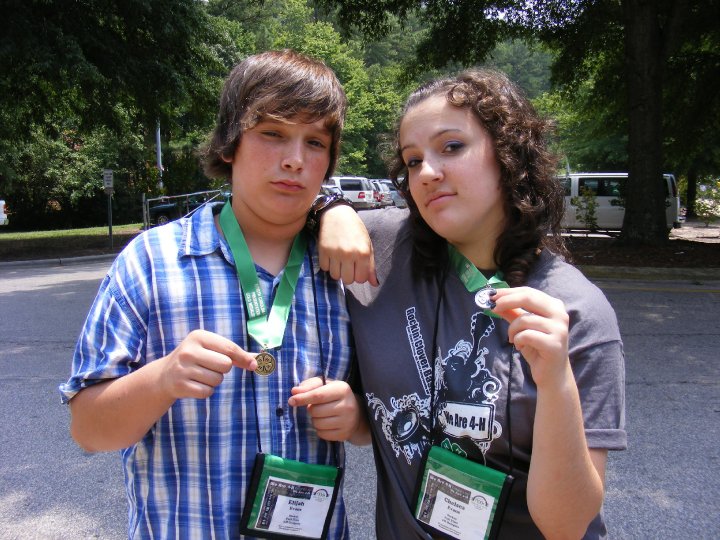 Like Chelsea, my oldest son, Elijah, joined 4-H at age five and continued until he aged out. Never a shy one, he was doing presentations on earthworms at age six and began winning medals as soon as he reached the competition age of nine—going on to win State gold three times. His project record books and portfolios also won highest honors. He served as 4-H District Reporter. He, too, was most successful in the 4-H Entertains arena. He did many talents acts with his sisters, being honored with talent appearances at State Congress and even performing at the 4-H Gala and the National Association of Agricultural Agents; annual convention. He was thrilled to be tapped by Chelsea to become an Honor Club member. Elijah’s 4-H involvement prepared him for his current career as a youth pastor and a Client Receivables Specialist at Inmar. 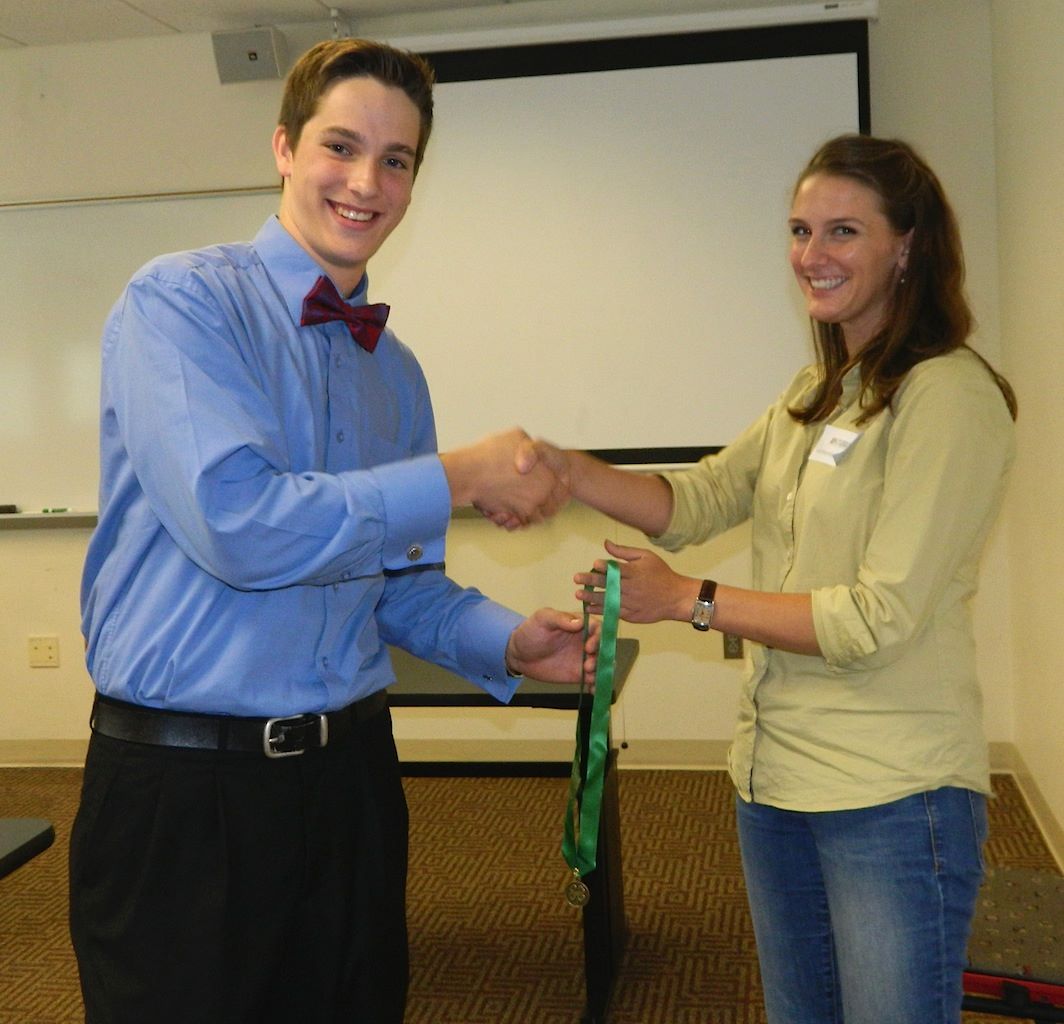 My youngest daughter Abigail was a career 4-H’er as well. The shyest of my five kids, she did not attempt presentations until she was about 12, but she quickly blossomed and advanced to State competition many times, winning several medals. She was especially skilled at doing portfolios, winning State gold. Abigail excelled in the 4-H Talent Show each year, often performing with her siblings—even at Congress. Like her three older siblings, she served as the School Skippers President for several years and also as a County Council officer. Perhaps her proudest moments were being tapped by Chelsea and Elijah into the Honor Club and winning Stokes County 4-H’er of the Year twice. Today she is the Insight Human
Services Jr. Blast site supervisor at London Elementary School where she leads many children daily. This formerly shy child was transformed into a strong leader primarily through 4-H! 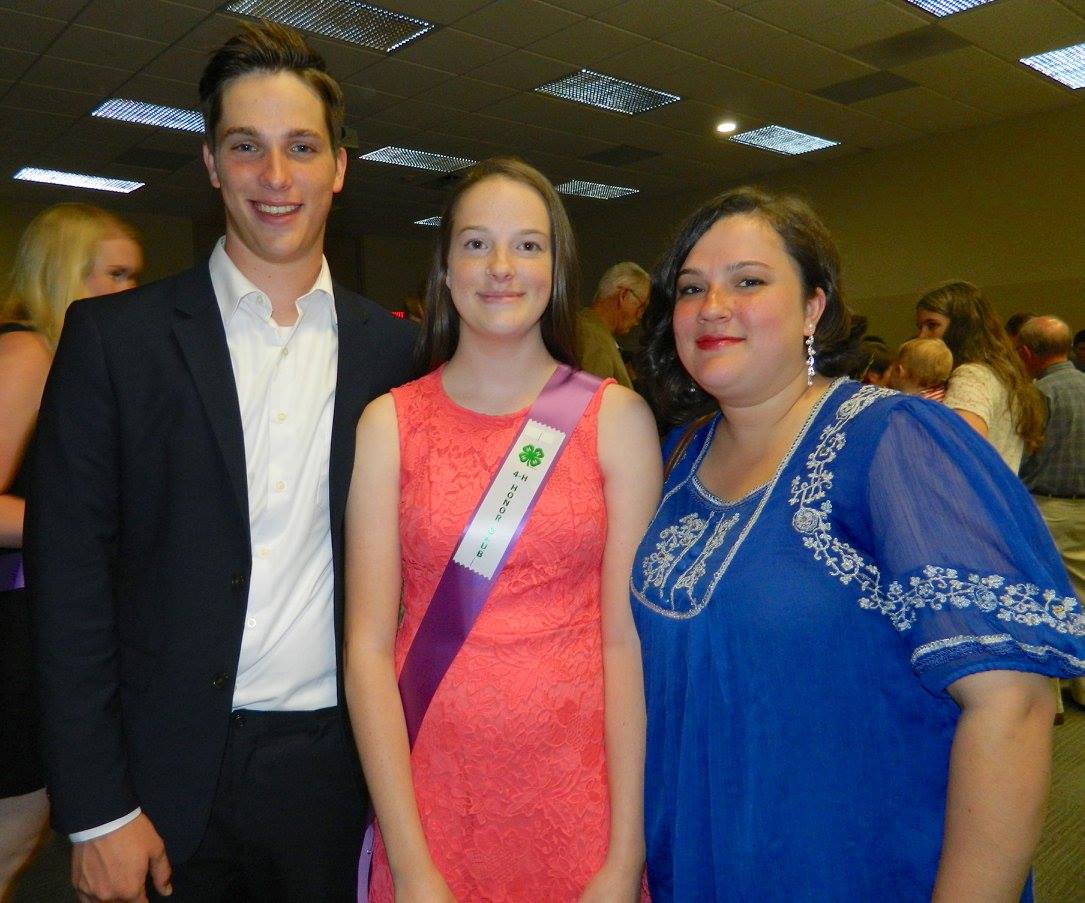 And finally, there is Malachi‚ still in 4-H and the treasurer of his club. Despite a speech impediment, he has bravely done presentations, advancing all the way to State and winning a medal his first year! In 2021, he finally won State gold in his favorite category of Environmental Science. His project record books have consistently won medals, with his Healthy Lifestyles one winning gold in 2021. Malachi was chosen as Stokes County’s 4-H’er of the Year for 2020. His goal is to be chosen for 4-H Honor Club like his siblings. 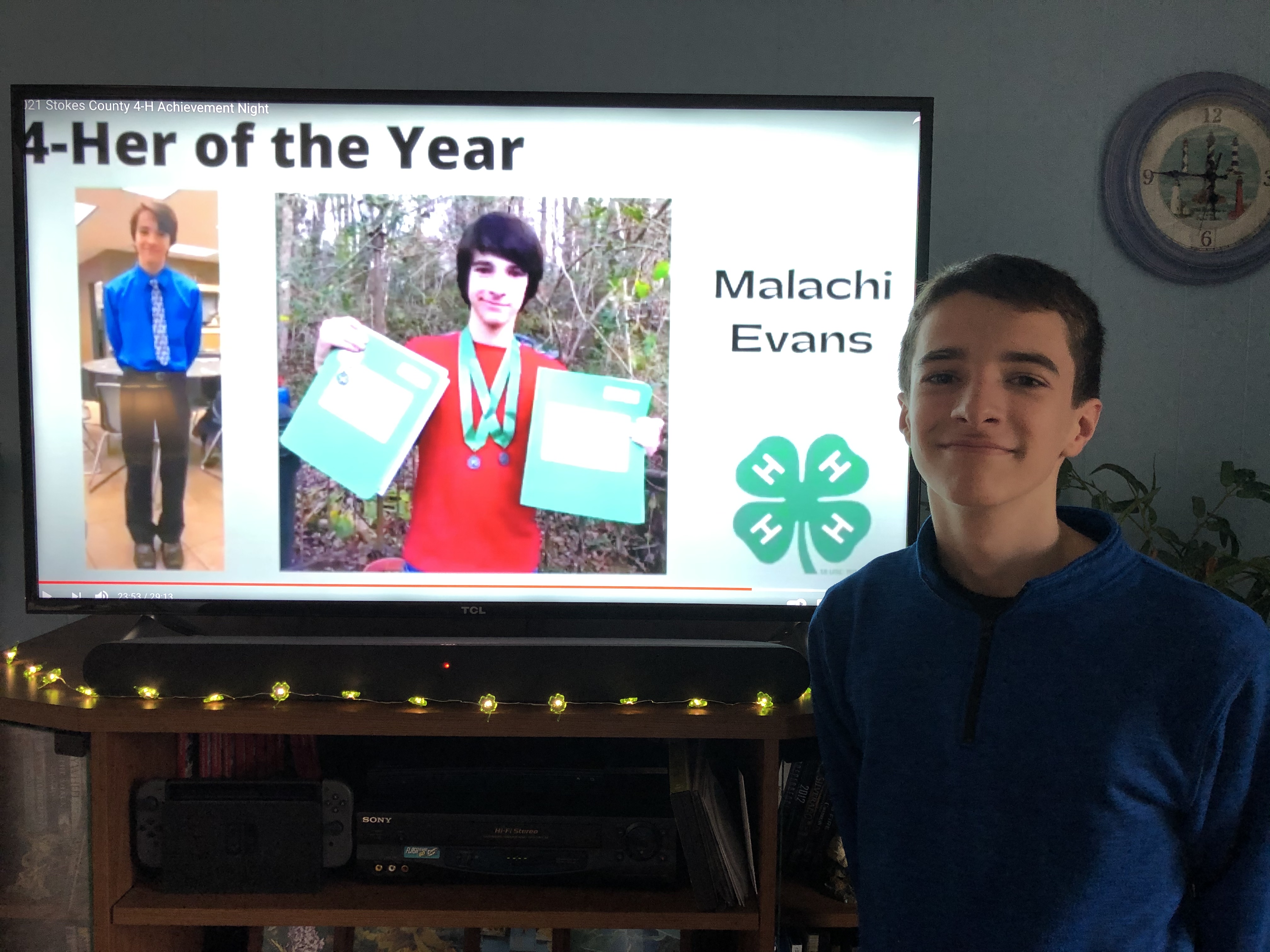 All of my children love 4-H and credit it with helping them to excel in their higher education and careers. Public speaking is the area they feel they were best trained in and which has been most helpful. The service aspect of 4-H has also been hugely important to our family. Through 4-H, we have volunteered through dancing and singing at nursing homes, stocking food pantries, visiting hospitals and so much more for 27 years. 4-H taught my kids that there was something bigger than themselves to live for. We cannot sing the praises of 4-H enough and hope to remain involved for the rest of our lives as the next generations of our family come into being! 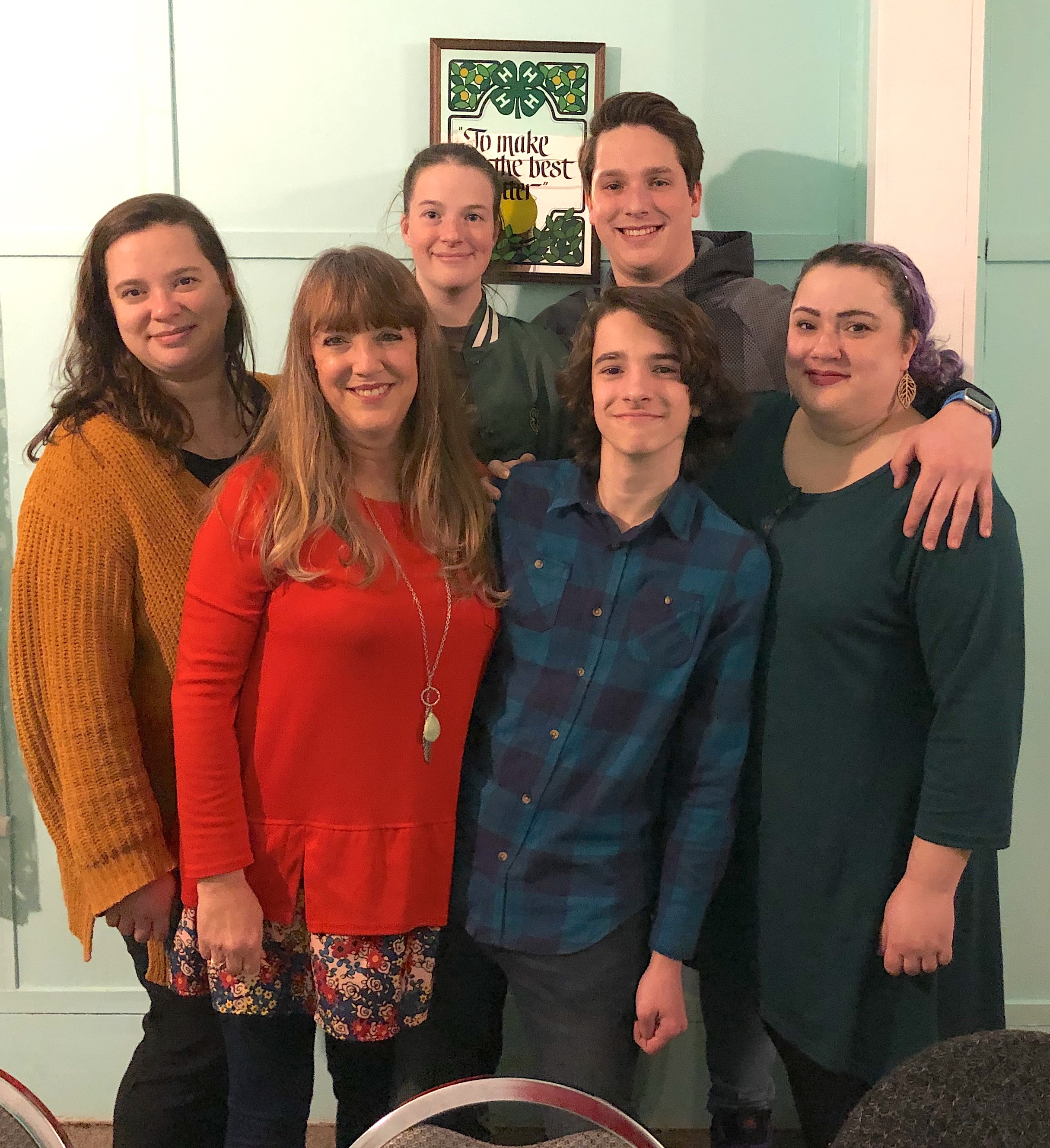